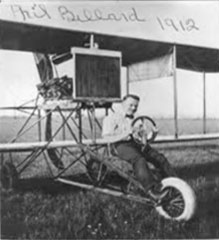 Philip Billard, 1912Philip Billard Airport was opened to the public in April 1940. The airport was dedicated to a prominent Topeka resident, Philip L. Billard. Billard volunteered for military service as a pilot when the United States entered World War 1. Commissioned a captain in the Kansas National Guard, he was charged with forming the state's first aviation unit. He then joined the U. S. Army, where he was assigned duty as a test pilot in France. Shown below is the type of plane Billard flew while serving oversees. On July 24, 1918 Philip Billard was killed when the DeHaviland 4, he was piloting crashed. 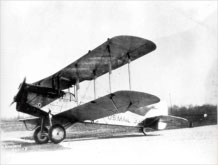 DeHaviland 4From the 1940s to the 1970s, Billard Airport was owned and operated by the City of Topeka. In January 1974, the Metropolitan Topeka Airport Authority was created to oversee most of the facilities that were once exclusively operated by the military at Forbes Field. Those facilities were then transferred to the city in April 1976.

At left an air mail flown from Philip Billard Airport during its dedication in 1940. The VFW post #1650, mentioned on the letter, is still active in the Topeka community today.